What Is a Migraine?

Migraines are severe headaches, often described as a throbbing pain in one side of the head. Migraine attacks can be painful and debilitating, making you want to sleep in a dark room until the pain passes. This could last for a period of 4 to 72 hours. Sometimes, Migraine headaches are accompanied by other symptoms such as nausea, vomiting, lethargy, stomachache, diarrhea, etc. There are different types of migraines –

Difference between Migraines and Normal Headaches

Whom do Migraines Affect?

Some groups of people are at a higher risk of suffering from Migraines than others. However, it is important to mention that Migraine is never a one-off instance. If it has occurred once, you are likely to experience it again.

People with a genetic history of Migraines are more likely to experience Migraine headaches themselves. Women are also affected by Migraines more than men. Usually, the condition surfaces in adolescence and continues until the age of forty or forty-five.

On average a person suffering from Migraines may experience one attack a month. Once the headache and symptoms have cleared, you don’t feel any discomfort until the next bout. If you get Migraine attacks every week or more, consult your doctor for the right medication and treatment.

Stages of a Migraine

The factors that trigger Migraine are different for different people. Sometimes, women experience Migraines on certain days of their periods. This is when the estrogen levels drop in the female body. This may be treated with hormone supplements. Other causes of Migraine include –

Doctors such as neurologists help in diagnosing Migraine if your headaches are persistent and excruciating. To diagnose a Migraine the doctor may look into your medical and family history followed by a neurological and physical examination.

In some cases, doctors advise tests to rule out any other causes of headaches. This could be –

Doctors decide how to cure migraine for you and prescribe medications for you based on the symptoms and intensity of pain you are experiencing. Usually, there are two ways to stop a migraine. Treatment for Migraines are categorized into two types –

Consider the wide range of effective treatments for Migraine for quick and long-lasting relief on MedsNow. Here is a look at the medications available on MedsNow –

When it comes to Migraines, prevention is always better than cure. Patients suffering from Migraines are always advised to find ways to prevent the occurrence of an attack. Here are a few how-toPrevent Migraines –

Migraine may cause the following complications –

Every person has a different trigger for Migraines. However, those who suffer from frequent Migraine attacks are advised to avoid caffeine, aged cheeses, processed meat, alcohol, MSG, citrus fruits, chocolates, spicy foods, and any food containing aspartame.

If you have Migraines then it is advisable to stick to foods that can help prevent headaches. Such as –

Migraines are severe headaches usually described as throbbing or pulsating pain on one side or both sides of the head.

Migraines in children are usually centered on digestive issues and maybe relieved after throwing up or the migraines accompanied by diarrhea. These are known as stomach migraines.

Yes. Whenever possible, lie down in a dark and quiet place until the pain passes. This will help reduce the Migraine intensity and help you relax. Sometimes it also helps to keep a damp cloth on your forehead or give yourself a scalp massage.

Even though Migraines are painful and affect the quality of life, they are not otherwise dangerous. Several studies have revealed that those suffering from migraines with aura are at a high risk of ischemic stroke.

No. It is best to avoid caffeinated drinks such as coffee if you suffer from Migraines.

If you are suffering from a Migraine, you should see a doctor if –

After a Migraine attack, you may feel fatigued, sensitivity to bright lights, loud sound, low energy, and depression. Some people also experience an inability to focus on daily tasks described as a ‘mental fog’.

Some researchers believe that vomiting marks the normalization of gut movement that is hindered by the Migraine. That is why the end of the Migraine is marked by vomiting and some people also experience relief in their Migraine headache by inducing vomiting.

Migraines trigger different body reactions from different people. Some people get diarrhea as an accompanying symptom of Migraines. There is no definite medical explanation for why this happens.

It is usually recommended that people with Migraines should sleep in a dark, quiet room to relieve their headache. Sometimes it also helps to keep a damp cloth on your forehead or give yourself a scalp massage.

A silent Migraine is when you experience the ‘aura’ that sometimes accompanies the headache in a Migraine, but you don’t feel any pain.

Acupressure experts say that it is possible to relieve a Migraine headache by applying pressure to a point called ‘Hegu’ or the point between the base of your thumb and index finger. 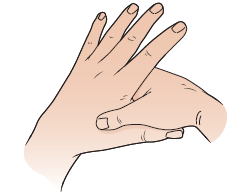 Some reasons why you wake up with a Migraine could be dehydration, poor sleeping habits, disturbed sleep, stress, or side effects of medication.

Yes. Research has proved that frequent Migraine attacks cause damage to the brain structure in the long term. It increases the risk of lesions, stroke, and may harm the nervous system.

Migraines are usually worse in adulthood. People between the ages of 35 to 45 report the highest intensity and duration of Migraine attacks.

No. There is no medical evidence to suggest that Migraines can affect the memory of the individual.

No, Migraines cannot be diagnosed in an MRI scan. However, an MRI scan helps the doctors in ruling out other medical conditions that may cause headaches such as infections, fluid buildup, and tumors.

Home remedies for migraine include:

To provide high-quality, convenient and reliable care without the awkward explanations

Our team of UK registered healthcare professionals are here to provide you with ongoing care and support to ensure your specific needs are best met using their extensive experience across a wide range of healthcare specialties.

"So many hours saved not standing in lines. Thank you Medsnow!!"
Trustpilot

How Can We Help You